For the fifth time, Allianz Esa has awarded the »Inland Shipping Innovation Prize« at the »Forum Binnenschifffahrt«. This year the prize went to the shipowner Steffen Augspurger and the scientist Joachim Zöllner (DST) for their jointly developed Flex-tunnel. 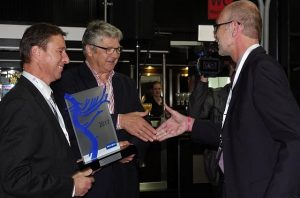 Head of Market Management at Allianz Esa, honored in his laudatory speech that Augspurger, Managing Partner of the shipping company Heinz Mertz & Co. Schiffahrt from Stuttgart and Zöllner, Head of Ship Development at the Development Center for Ship Technology and Transport Systems e. V. (DST), all in one constructive dialogue on the innovative technical solution.

The Flex-tunnel is an improved ship propulsion system that is more than contemporary in the face of increasingly frequent low water periods, according to Krahnke at the award ceremony. With him about 10 to 20 % less drive power needed.

In 2015, the first ship with the Van der Velden Flex-Tunnel became the coupled unit »Rhenus Duisburg« of Rhenus PartnerShip. According to Edwin van Buren, Director of R & D at Van der Velden, there are more orders for the Flex-tunnel.

The jury, which decides on the award of the “Inland Shipping Innovation Prize”, consists of the editorial teams of the journals »Binnenschifffahrt« and »Schiffahrt und Technik«.