The DeConTrans research project deals with the design and development of small, hybrid-electric powered vessels for the decentralized transport of containers in the West German canal network and adjacent waterways, among other things.

In addition, a concept for a cargo handling facility on board the ship was developed, which efficiently enables cargo handling along the routes independently of existing handling infrastructure such as container gantry cranes or reach stackers. The concept is based on a self-propelled and height-adjustable scissor lift that can move the picked-up containers along the ship via a bow-side ramp to shore. The corresponding new transshipment points thus do not require any capital-intensive infrastructure to be connected to the logistics network.

Due to the low unloading depths of the ships, rudder propeller systems were chosen for the propulsion of the ship, in which the propeller is vertically adjustable and can be used at any height. This height adjustability allows the arrangement of a larger propeller diameter.

Extensive numerical simulations (CFD) were performed in advance of the model tests to determine the most streamlined ship shape possible. With the help of parametric models of the designed ship hulls, an optimization of the geometry, especially in the area of the stern, allowed a significant reduction of the required propulsion power to be shown with the help of the simulations. OpenFOAM was used as the chosen software solution.

The computational matrix included drag and propulsion simulations at both model and full-scale for a wide range of ship speeds. The influence of shallow water and effects due to limited navigation in the channel were also subject of the numerical investigations.

The following images show exemplary results of the CFD calculations. The coloring of the hull represents the distribution of hydrodynamic pressure; red areas show areas of high pressure, while blue areas show areas of low pressure. The streamlines illustrate the inflow to the propeller. The variable-pitch rudder propeller system was geometrically resolved in the calculations, and the influence of the propeller itself was taken into account using a force-disk model.

Numerically determined pressure distribution at the bow and stern of the ship (left), induced wave pattern in the view from the front © DST

For the numerically optimized hull geometries, the first series of tests was performed with resistance tests and self-propulsion tests in the large shallow water tank of the DST. The test matrix of the model tests initially included the three vessels for single-layer container transport on three low passages and several speeds. The aforementioned elevation adjustability of the rudder propellers was also examined in more detail. 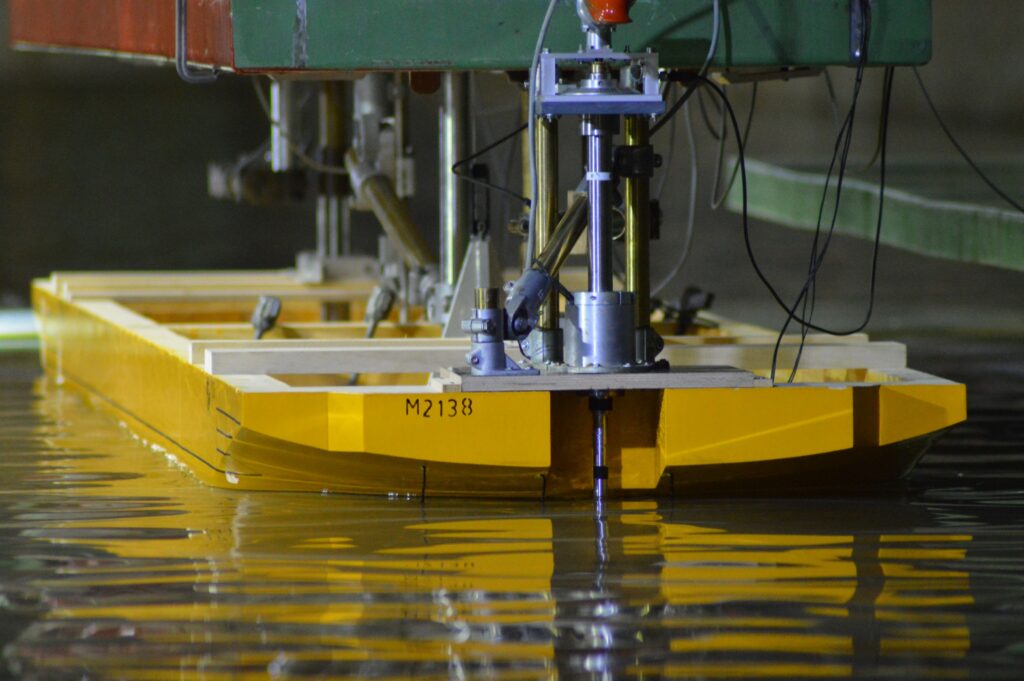 Model tests in the shallow water tank of the DST © DST

For the second series of tests, a rectangular trapezoidal profile was installed in the shallow water tank over a distance of 80 meters in order to realistically reproduce the typical cross-section of West German canals.

Propulsion characteristics for four types of vessels at two different distances from the sheet pile wall, several low passages and velocities were the subject of investigation. In addition, flow and wave probes were placed to record the induced flow velocities.

Canal runs: measurement of hawser and ramp forces in the port © DST

Another important basis of the project is the interaction forces of a ship passing in the channel with a ship lying in the port. For this purpose, a port on the canal was additionally modeled for the third series of experiments. During the passage of other ships, both hawser and ramp forces were measured.

After completion of the work package, the results of the model tests will find their way into the discrete-event simulation and scenario-based investigation of the logistics concept.

In addition, the results from this and other work streams will be presented to the project sponsor and the project advisory board at a milestone meeting at the end of the year.

More information on the project can be found here: https://www.dst-org.de/en/decontrans/

This project is funded by the European Regional Development Fund (ERDF) and by the State of North Rhine-Westphalia under grant agreement no. EFRE-0801222 (DeConTrans, AZ: ML-2-1-010A).