The set-up of the new Test and Control Centre Autonomous Inland Shipping at the DST Development Centre of Ship Technology and Transport Systems has begun in October 2019. The new centre is built by three research partners – DST, University of Duisburg-Essen, and RWTH Aachen University – and forms the essential research infrastructure for the subsequent research and development activities around autonomous inland shipping. 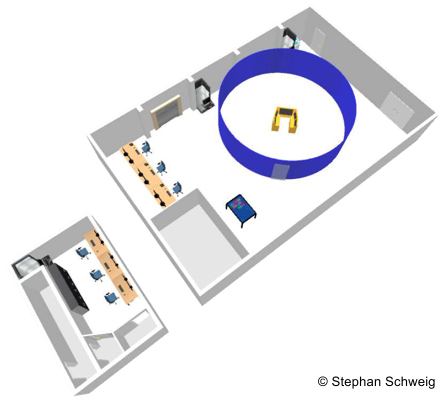 • a modern, freely configurable control stand in a ship-piloting simulator with a 360-degree 3D projection system,

• a control center with three workplaces for the coordination of the blended traffic with conventional and autonomous inland vessels, and

• four workplaces for research scientists with the necessary computer equipment for the development of AI-based autonomous control systems.

The Test and Control Centre Autonomous Inland Shipping is expected to be inaugurated in March 2020.