On 27 January 2017, interested visitors were once again given the opportunity to take a look behind the scenes at various laboratories and facilities of the University of Duisburg-Essen. The DST, as the An-Institut of the UDE, also took part in this event.

More than 50 visitors were interested in the DST test facilities, for which the doors also opened at 5 pm. For example, there was the opportunity to take part in a ride on the towing vehicle along the almost 200 m long large towing tank, to see ship models made of Abachi wood as well as a selection of stick propellers. 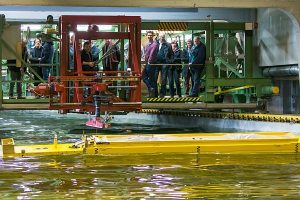 A highlight for many visitors was certainly the visit of the ship management simulator in the DST. As the captain of an inland waterway vessel, they were allowed to try to steer a vessel on the Rhine in order to determine how difficult this undertaking was and how quickly a vessel could be put to ground.

Many interested people are already waiting for the next Engineer’s Night in 2018 to get to know more experimental facilities and have exciting experiences.