‘JRF on site’ event: Urban supply via the waterway

On 28 March 2022, the online event ‘Urban supply via the waterway’ took place as part of the event series ‘JRF on site’. It was also designed as the final event of the research project ‘DeConTrans – Innovative concepts for a decentralized waterborne container transport’ with the participation of both DST and RIF, two of the JRF member institutes. 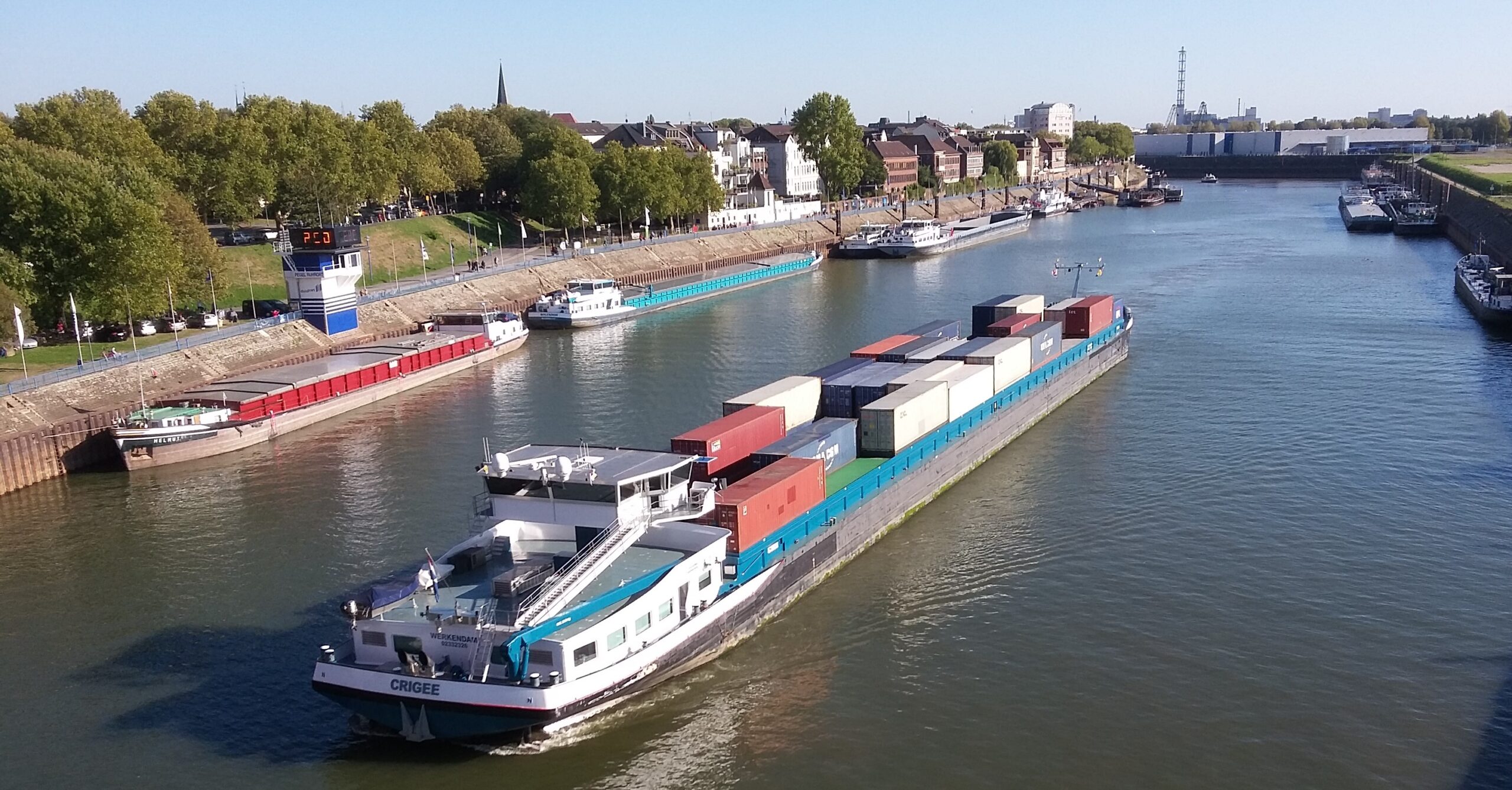 Ramona Fels, vice chairwoman of the board and commercial director of the Johannes Rau Research Foundation, who also acted as moderator for the event, welcomed the participants. With almost 120 registrations, the event was met with lively interest among the professional public. This was followed by the first thematic block with three keynote presentations on innovation projects from across Germany. First, Tim Holzki from the Technical University of Berlin presented the A-SWARM project, which is investigating route sharing with small autonomous marine units for use in urban areas. Holzki emphasized the close connection between city logistics on the waterway and a meaningful connection to the last mile, for example with cargo bikes or e-vehicles. In the next presentation, Janusz Andrzej Piotrowski from the Carl von Ossietzky University of Oldenburg presented the economic potential of autonomous vessels powered by renewable energy, a key feature of the European AVATAR project. The project aims to relieve road congestion and avoid noise and exhaust emissions by developing economically viable alternatives via waterways. Daniel Rybarczyk from the Berlin-based company BANLabs presented the idea of the “Smart Port Shuttle Hildesheim”. This is an autonomous concept for better connecting ports in branch canals with the main route. In this specific case, the port of Hildesheim will be connected to the Mittelland Canal in the branch canal of the same name. The focus is on a push-tow concept that offers the necessary flexibility and allows intermediate storage of the lighter units on the water. 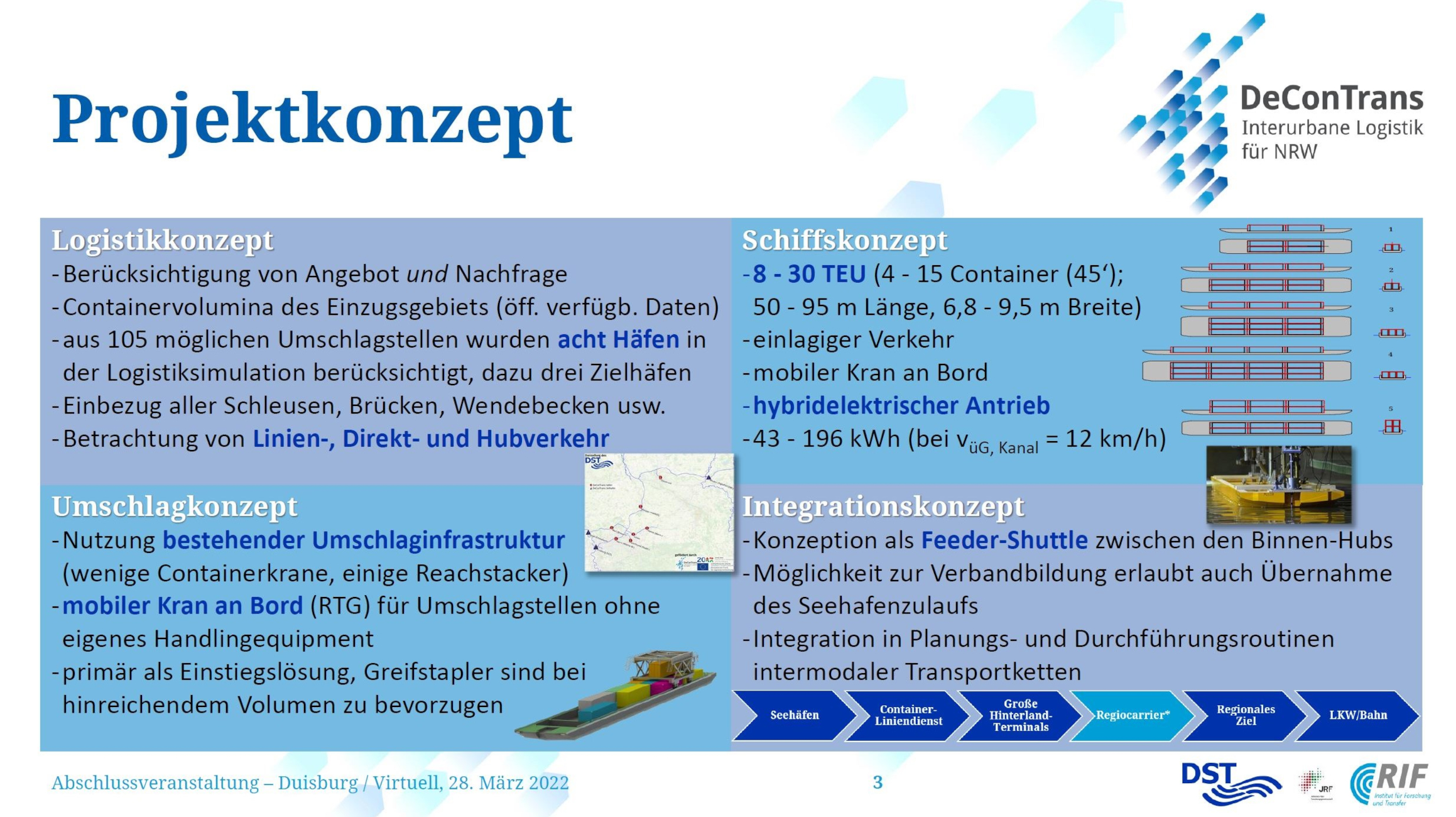 Project concept DeConTrans from the presentation at the end of the project. 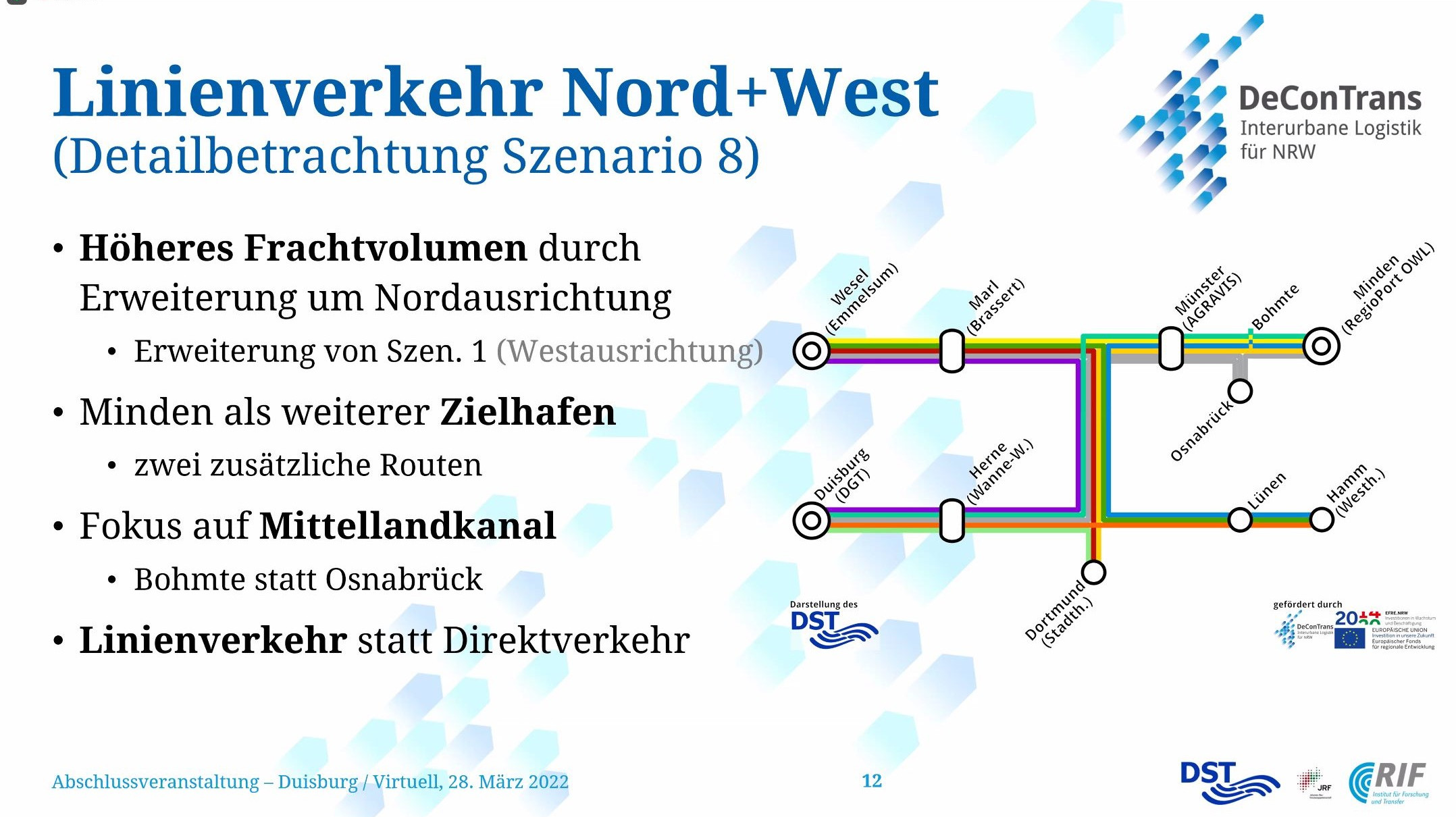 Presentation of scenario 8 from the DeConTrans presentation.

In the second block of topics, which focused on results from research projects in North Rhine-Westphalia, Cyril Alias, project manager and head of the department for transport systems and logistics at the DST, first presented the DeConTrans project concept. It comprises a logistics concept integrated into the existing freight flows in the area between the Rhine and the Weser, small inland vessels for single-layer container traffic, and a transhipment concept that is primarily based on existing transhipment infrastructure and provides for a mobile on-board crane for demand-oriented transhipment at decentralized transhipment points. Subsequently, the developed simulation tool for the investigation of the overall concept was presented in a live demonstration by Sven Severin from the RIF – Institute for Research and Transfer. At the end of the presentation Jonas zum Felde (DST) presented the results of the detailed simulation study of the project. In the same thematic block, Prof. Holger Beckmann from the Niederrhein University of Applied Sciences presented the concept of SmartPark City Hubs (SPaCiH) from the project of the same name. The concept consists of hub locations connected by rail and barge to realize sustainable supply in urban and rural areas. In the last presentation of the day, Günter Hackenfort from GH System presented the iWALD project, which deals with the development of standardized small containers and the associated infrastructure. Together with the projects DeConTrans and SPaCiH, this results in an overall idea for the urban supply of the future.

The following panel discussion, moderated by Matthias Simons from the Lower Rhine Chamber of Commerce and Industry in Duisburg – Wesel – Kleve, was attended by Bernd Reuther MP and Cyril Alias, as well as Marcel Lohbeck (BÖB and VBW), Jens Hohls (Port of Braunschweig) and Hendrik Stöhr (Reederei Deymann). The discussion focused on the potential of city logistics on waterways and the conditions necessary for this, such as the use of standard load carriers, a holistic view of the logistics chain and social acceptance. The panel also discussed funding opportunities, for example in the form of operating subsidies and relaxed legal requirements, as well as the establishment of real laboratories to test innovations in the market environment.

You can find out more about the DeConTrans research project here: DeConTrans

The complete program of the event can be found here (in German language only): Program flyer

he presentations of the lectures can be downloaded here (in German language only): JRF post-event report

A recording of the event is available on the JRF YouTube channel:

For further information, please reach out to